Love and Fear as Factors in a Relationship 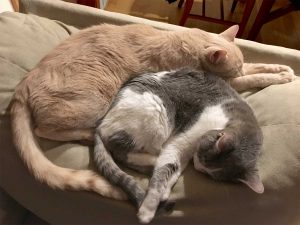 Imagine you’re a teeny-weeny organism back in the depths of time. There are things you need and gravitate towards like food and sunlight, and dangerous things you move away from like predators, acidity or extreme temperatures. These twin approaches to survival persist to this day, and as humans, we call them love and fear. We are drawn to that which we love, and avoid that which we fear.

Fear is unpleasant, and we can avoid the discomfort by not looking at it directly, but it still affects our behavior like a hand pushing us from behind. Sometimes we are conscious of it and choose not to walk down a dark alley at night, but most of the time it acts upon us unseen. To understand how it controls us, we must look over our shoulder and face it.

We used to live in an environment where what we feared could kill us, and it paid to err on the side of caution. Is that a stick or a snake across the path? If you wrongly assume a stick, it could be fatal. This historical cautiousness leads us to exaggerate our fears.

The antidote to all this is daylight. The key to avoid being controlled by our emotions is to be aware of them and to realize that, say, feeling angry about something and acting upon it are two separate things. By owning the anger, you have the choice of what to do with it.

And so it is with fear. It is almost always about events in the future. Bring out that fear. Look at it. If it is real and your electricity is about to be shut off, do what you need to do to avert it, but most fears are not so certain. A possibly apocryphal story: Napoleon would delay opening mail for three weeks because he found that most problems had resolved themselves by then. Most of the things we fear do not come to pass.

When we act from love in solving the decisions of our relationships, a very different dynamic presents itself. This can be seen in several stories we have heard from couples about their relationship experiences.

One of these couples shared that the wife was going to retire soon from full time work. The husband, who had been retired for some time and been home alone most days, told us that he had some trepidation thinking about his partner’s imminent retirement and the fact that she would be in the house much more. He was concerned about the changes this would bring to his schedule and overall habitual patterns. However, he also emphasized that although he had some concerns, he was sure that they would work them out, and he was looking forward to having more time together.

We have heard this worry about retirement before from couples we have interviewed. Some fear was associated with big changes, but the couples had found ways by acting through a loving base to deal with the fear in what was a positive way for their relationships.

Another couple we were with shared that although they have been very close for many years, they had up until recently maintained two separate residences. They decided to move in together, and this brought up certain fears about how each might lose their sacred alone time and space. After sharing their fears and concerns with each other, they decided they would maintain the schedule that had worked so well for them when they lived apart. They would only sleep together and share their space three nights a week, and would otherwise maintain separate time and space when at home.

Let love, not fear, be the basis of all relationships #love #relationships #quote Click To TweetIn all of these stories there is a common factor. Although fear was experienced in dealing with change, each time the couples acted from a base of love (which contains trust) and used that love to safely communicate their fears. They knew that their partners would not misconstrue their concerns, but would rather hear and understand them and they would cooperate to find solutions that worked for both of them.

When fear is the basis of how we relate, we tend not to communicate. This often causes withdrawal, which causes more fear and suspicion and this vicious cycle never leads to a successful relationship.

An important understanding on how to achieve the kind of peaceful relationships that we share about in our books and this blog is that we all experience fear. However, if love, not fear, is the basis from which we relate to each other, then we will feel safe to communicate. We will work to find mutual solutions and we will become stronger and more united in our relationship.