In a Successful Relationship You Have to Be Cooperative 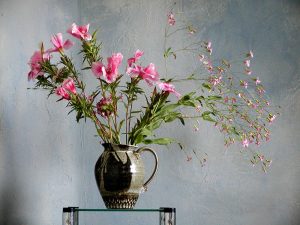 We keep cut flowers in the house and carry them up to decorate the bedroom at night. A morning conversation:
“We need to bring the flowers down.”
“I’ve done it already.”

This is a teeny example of how we work cooperatively. We cooperate with each other. We are cooperative people. The variants of this word are many. Its roots are co-, together, and opus, work. This word is embedded deeply in our language; it appears as nouns, verbs and adjectives. Beethoven’s opus 67. A heart operation. A building co-op. Operating a forklift.

In society, cooperation exists along with its opposite, competition. There is a tension between the group and the individual. We could go into a whole political spiel here, but won’t.

In our relationship, as in society, we are also individuals. The difference is that we aren’t in competition. Our relationship is based on the recognition that together we are a cooperative entity of two.

We share and relate from a place of mutual respect and consideration. This engenders a spirit of cooperation rather than one of comparison and measuring. There is a good faith basis that each of us wants to be a contributor to the well-being of the other and our relationship. Neither of us is trying to get away with anything or hide from sharing life’s upkeep activities.

This is not just an intellectual idea. It is rather the underlying sense we have of our togetherness; it’s a sense of working together, of being on the same side. We have a feeling of support and goodwill, not a thought but a feeling, and this is the source of our actions and attitudes in the relationship.

This sense is an important one to maintain. It is easy to slip into measuring, making lists, or comparing who does what. It’s easy to take on a view from a personal and you-centered approach, where you are mainly aware of what you think and what you do. In this mindset, you experience your partner’s contributions only in terms of how they compare to yours. It creates a sense of two separate poles, and emphasizes distance rather than union.

We relate from a place of mutual respect that engenders a spirit of cooperation, not competition Click To TweetIt is easy, especially in a competitive milieu, to have a scoring mentality where tasks are rated and traded. There’s nothing wrong with this per se, but it breaks down when one or both of you feel that you are getting a worse deal or doing more work. Rather than finding the apportionment that works best for both of you, you let the partnership mentality slip away by reverting to a self viewpoint. (As we’re into semantics this week, note how close that is to “selfish.”)

This is our view of a relationship, and it matches the cooperative view of society. Some people see the individual as the paramount aspect of society.

“…there’s no such thing as society. There are individual men and women and there are families.” Margaret Thatcher.

It’s possible that people with such a viewpoint can have a relationship characterized by healthy competition, but we find that hard to imagine; a relationship only exists in the connections between people.

We dwell in a place of harmony, based on the deep sense of trust we have for each other and our mutual commitment. This trust carries us through those times when one of those doubting, measuring thoughts rears its head and tries to assert itself.

When there is a sense of imbalance disturbing one of us, we communicate about it. We do this by speaking in the “I” mode so that it reflects that we are aware it is something going on with us and that it is not about the other person. When something is communicated in this way, it does not feel like an attack or an accusation. The person listening will find it much easier to respond openly and without the need for defense. This approach does not bring forth a counter list. (We all have those lists resting lightly just below the surface.)

If you find yourselves falling into bickering and measuring, or throwing lists of you didn’t and I did at each other, stop and remember the basic principles of your relationship. You are friends, you are lovers, you are partners, you want the best for each other. Speak these things aloud to each other. And when one of you slips, let your mate pull you back.

Most of all, let us all come from our highest feelings. We usually have many different responses to any one given situation or stimulus. Pick your highest to act from. Be committed together to your highest individual and mutual responses. Let’s spread peace by living peacefully together.